Let’s take back the Internet! 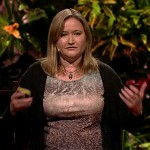 Ted Talk by Rebecca MacKinnon on freedom in the Internet. Todays social networks are large companies and millions depend on their services to communicate and voice their political opinion. Large multinationals that own this networks sometimes comply with the demands of dictators to protect this companies economic interests in their countries, and this is a threat to our freedoms.

From Ted Talks: Rebecca MacKinnon: Let’s take back the Internet!

In this powerful talk from TEDGlobal, Rebecca MacKinnon describes the expanding struggle for freedom and control in cyberspace, and asks: How do we design the next phase of the Internet with accountability and freedom at its core, rather than control? She believes the internet is headed for a “Magna Carta” moment when citizens around the world demand that their governments protect free speech and their right to connection.

Digital activist, online producer and webmaster.
View all posts by Osvaldo →
This entry was posted in Highlights and tagged Activism, Information, Video. Bookmark the permalink.