I have spent hundreds of hours experimenting with more than a dozen content management systems. The list bellow includes only those in which I developed public projects. 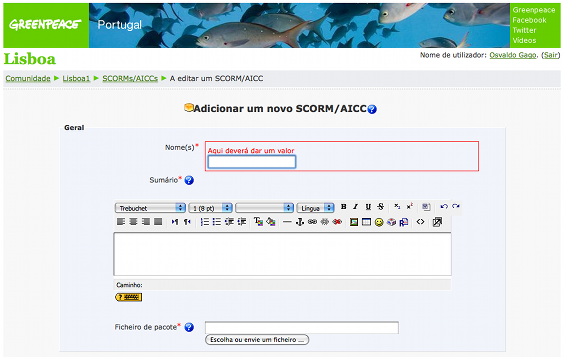 Drupal is a very popular content management system, used by many NGO’s to manage their sites (i.e. Amnesty International and Greenpeace UK). As a volunteer, I’ve used it to create a website for Quercus Lisbon and for Casa da Cultura de Loulé, a local organization in Loulé. Currently I’m a system administrator for the CCL website.

WordPress is one of the most used content management systems for blogs. Recent versions have added new functionalities that makes it a good option for other websites as well. I’ve used WordPress to create Links.Greenpeace.Pt, a news and blog posts aggregator for Greenpeace Portugal virtual office. This website is also made in WordPress.

Moodle is a virtual learning environment. In Greenpeace we used Moodle to deploy an online community for the Portuguese virtual office with two local groups involving about 60 members. I’ve installed, configured, designed the template and administered the community from October 2008 until now.

Mediawiki is the content management system behind Wikipedia. I’ve started using Mediawiki as a volunteer editor in the Portuguese version of Wikinews and in Wikimedia Commons. Later I’ve used it to create Ubuntupedia, a website about Ubuntu, the most popular Linux based operating system.

Spip is a French content management system to publish magazines and on-line newspapers (i.e Le Monde Diplomatique). I’ve used it to create Quercus TV for Quercus, the biggest Portuguese NGO. I was one of the founders of the project and I’ve created the current design. Today my responsibilities are just to update the cms.

Dokuwiki is a very simple, but effective wiki platform, used mostly to create instruction manuals and small intranets. I’ve installed, used and administer this CMS to organise the project and to create an instructions manual for Quercus TV.

Although the name implies that it’s a wiki, this content management system is much more than a wiki. Twikiwiki is a fully featured solution to build intranets. Greenpeace Portugal virtual office used it as a groupware solution. I installed maintained and administered it.

EPiServer is a proprietary enterprise content management system. Greenpeace uses a modified version of EPiServer named Planet 3 to deploy it’s new sites. I was responsible for migrating Greenpeace Portugal from Planet 2 to Planet 3. The migration process involved restructuring the old website, and adapting it to the new design.