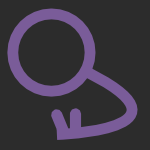 In a digitally connected world, privacy and security are major concerns and in the Internet privacy is difficult to guarantee. For example: Most people believe e-mail is private and that only people with the password can access it, but that’s not accurate. it’s very likely that anyone that administer the servers can read users e-mails. I know of a case where even costumer support personal could read the messages without being detected! (some years ago).

But there’s another risk: messages travel between computers unencrypted, and computers in between can be hacked to store messages that pass trough them. A mail message can pass trough many computers, often more than 10.

Digital activists, specially those who deal with sensitive information, risk their messages being intercepted and their lives may be at risk. The other risk is that computers or smart phones can be stolen compromising security.

The best way to minimise the risks is encryption, but encrypt and decrypt has to be simple to explain and understand, or it will not be used properly. That’s the main problem with Gnu Privacy Guard, the best encryption system around: It can’t be explained in 5 minutes or less, and if  you don’t use it correctly, you can fall into traps that compromise your privacy.

Ykey is a simple html5 application that was designed by me, based on JavaScript developed by John Walker, Fritz Schneider and others. Ykey uses the AES algorithm, the same chosen by the US Government to protect their confidential information. To encrypt or decrypt the user does not need install any program in their computer, reducing the risk of installing a Trojan horse. And because it is JavaScript, source code can (and should) be inspected to confirm that no information is sent to the server or that aren’t security holes.

Ykey works in many devices that have a modern browser, including computers with Windows, MacOS and Linux. It also works in devices with iOS (iPhone, iPod and iPad) and some Android Phones. The first time you visit the website your browser will cache the app, so you can use it off-line as well. It includes a help page with tips on how to use it.

You can also download the source code from where it was built  here.

Digital activist, online producer and webmaster.
View all posts by Osvaldo →
This entry was posted in Other and tagged Tools. Bookmark the permalink.